Nearly six months ago, with the thanks of so many great people, we built an incredible expanded site for the Garden Commons at the University of Louisville. This is my second major fundraising experience and a proud accomplishment of mine. The group is now under the care and influence of a fantastic group of students. And, Louisville Grows as always, is still providing consulting and guidance.

Courier Journal, June 25, 2011Chloe Crabtree watched her grandfather raise cattle and hay and tend a large garden while growing up in Monroe County in Southern Kentucky.
On Saturday morning, the University of Louisville junior plunged into a farming venture of a different sort: —a 6,000-square-foot organic garden wedged between roadways and parking lots on the Belknap Campus.

Along with about 45 students and other volunteers, Crabtree helped expand a project called Garden Commons by planting crops in raised beds, watering herbs and vegetables and building a greenhouse.

“I want everyone to experience a little bit of agriculture, know how to grow your own food, have the pride of growing it,” she said. “Some people wouldn’t be that interested in it from the campus, but they at least get to see it and how it’s done.”

The garden was developed last spring by U of L Fulbright scholar Paige Battcher, the university’s Cultural Center and the nonprofit organization Louisville Grows.

Other features of the expansion include six raised garden beds, bringing the total to 10; two 270-gallon rain barrels whose water will be used in the garden; and compost bins.

The harvest from the beds — tomatoes, squash, eggplant and other vegetables, along with herbs such as basil, cilantro and dill — will be used in cooking classes on campus, Crabtree said. The food also may be used in dining halls starting this fall.

John Wolff, managing director for wood finishes and adhesives for AkzoNobel, said the company has focused in recent years on sustainable initiatives. It has donated a greenhouse to Brandeis Elementary and funded an outdoor classroom at Pewee Valley Junior Academy.
AkzoNobel employees and their families were on hand to help at Garden Commons.
“It’s always fun to be together as a team, and you get the satisfaction out of helping something grow,” Wolff said.

The project fits in with U of L’s “urban mission” of educating people who live in a city about how to live healthy, sustainable lives, said Michael Anthony, director of the Cultural Center.
“What we’re trying to show people here is that, yes, even in your backyard, in the middle of a bustling city, you can plant your own food, you can grow your own,” he said. “So really it’s teaching our students and our community that it can be done.”

A Minha Cidade Natal
“My Hometown”

Here’s a look at my hometown of Louisville, Kentucky in a video I created for Portuguese class (European Portuguese). The pronunciation is not perfect, but eh, who is?

Check out this brief video.

Moving Beyond the Automobile: Congestion Pricing from Streetfilms on Vimeo.

As the snow falls heavily outside, I find myself yearning for summer and thinking about a local food life…

To view full screen, click on “menu” in the bottom left corner.

Posted by the University of Louisville (univoflouisville) on YouTube, November 2010.

“Garden Commons co-founder, Paige Battcher, talks about the success and future plans for the garden. A mural was installed on the east wall of the Cultural Center as a creative symbol of sustainability. A time lapse of the installation is at the end of the video.”  Mural artwork created by Samuel Battcher, An.Automaton Designs.

This is one of the accomplishments I’m most proud of in my life. I started learning about urban agriculture and food security through osmosis. I was living in Thailand, at the age of 22, and realized that we simply need more vegetables on the streets of our American cities. Returning home to Louisville, KY, I helped start the non-profit Louisville Grows. We teamed up with the University to create a comprehensive urban farm and outdoor classroom. It was great experience for me leading this project. I helped fundraise and coordinate the $40K needed to make this project a reality, and I brought together all the players as well as the student group. I couldn’t have done this without the help of Mason Roberts, Michael Anthony, David Jones, Keith Inman, Larry Owsley,Shirley Willihnganz, and James Ramsey; our numerous supporters, volunteers, and students; and my younger brother Sam who made everything more beautiful.

It all started with a sketch in my journal.

The energy of the students carried it forward.

The Garden Commons project at the University of Louisville is something I’ve been working on for the past few months. The ground-breaking was last week. We have plenty of room to grow from here.

Why a garden? To grow food is the immediate answer. Why is that important? I’ll let the following film clip speak to that. 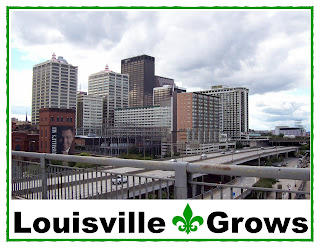 Traveling the world has shown me the value of community involvement in providing fresh and healthy foods to the mouths of thousands. Now that I am home, I wish to help create resources and ways in which healthy food can become more readily available in our communties. Travel through the west end of Louisville, or anywhere in the city for that matter… Do you see accessibility to fresh produce? Do you see fast-food chains filling the cracks of the neighborhoods? Do you see obesity as a result of unhealthy habits (and are these truly habits or rather disconnects between education, health, and affordability of whole foods)?

At Louisville Grows we are promoting sustainable living throughout our city. We are a start-up non-profit and can use your help.

FLoWERbOMB!! from Jessica Reeder on Vimeo.

Thirty-five baht, that’s all it costs? This was a question pondered as I scraped up the last little bit of my vegetable and rice dish on the streets of Bangkok, Thailand. Thirty-five baht, approximately one U.S. dollar, had paid for whole foods –not additives, or pre-formulated nutrient combinations, but foods grown on this Earth. Think about it. What’s cheaper: an item from the dollar menu at McDonalds or fresh squash in the produce aisle? For the first time in my life, I was living in a country where cheap meals did not translate into unhealthy meals.Returning to my home in the U.S., where two-thirds of Americans qualify as overweight or obese according to SmallStep.gov, I hesitated to believe that my old eating habits would be appropriate enough to keep me out of these qualifications. Opening a jar of Claussen® Kosher Dill pickles the other day, I read the following: “Contains less than 2% of High Fructose Corn Syrup, Calcium Chloride, Polysorbate 80…” –kosher huh? If you are like me, you may be wondering, for example, if one or more of the numerous American corn associations or lobbyists groups are playing a hand (and by that, I mean using money) to boost the use of high fructose corn syrup, an otherwise nonessential ingredient in pickles. This is one example of many. 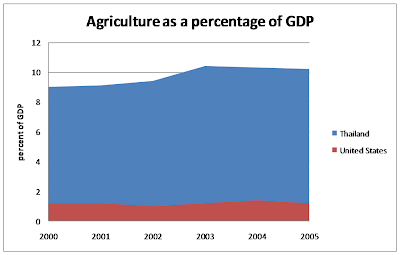 So, what sets Thailand apart as a place where whole foods are actually cheaper than our seemingly healthful packaged foods? The answer: agriculture. In 2005, Thailand’s agricultural sector could attest to 10.2% of annual GDP –whereas, the U.S. agricultural sector accounted for only 1.2% of GDP as recorded by Earth Trends, in cooperation with the Development Data Group of The World Bank.

Undoubtedly, the presence of whole foods in the American diet in combination with exercise is essential to a healthier America. As our economy leans away from agriculture, and into the arms of foreign imports, our health as a nation becomes at risk. Let us join together in supporting our local farmers so our grocery stores may once again be filled with food grown on our own soil. What can you do? Join your local CSA (Community Supported Agriculture). For more information on a national-level: LocalHarvest.org

For Louisville (KY) natives, visitors, and residents, take a look at: Grasshoppers Distribution

—
This post is not intended to be offensive, nor is it meant to portray an expert opinion. It is intended to encourage people to keep asking questions and to take action for the betterment of all.
—

As I mentioned in a previous post, it is concern of mine that measurements in human progress and economic growth focus so heavily on GDP or GNP, the amount of materials produced, consumed, and so forth.

As it turns out, this concern is held by many of the world’s economists and policy makers. Take this article by the European Commission, one of the governing bodies of the European Union, as an example:

“EU seeks new tools for measuring economic performance that give more weight to
social and environmental aspects of wellbeing.” http://ec.europa.eu/news/economy/090908_en.htm

—
In other economic news, Thailand is preparing to stimulate its economy via a massive influx of Thai Baht into local programs. This influx of cash is meant to boost a “three-year investment program on transportation, health and education projects” in order to prop up and increase economic growth and stability.
See Full Text.

Chook dii ka (best wishes) on the project. For a country struggling in the past decade to cohesively back its governing body, I hope there is at least a unified agreement that investment in transportation, health, and education is a win-win situation regardless of percentile economic shifts. In fact, in the U.S. it is a shame to see continued budget cuts in education as economic times become tougher –perhaps times of economic hardship are the most neccessary times to more fully educate the masses, the future generations of people that will someday lead our country.