Here’s the idea: most news coverage is overwhelmingly biased, censored and marketed toward an audience of pocketbooks. During the Fulbright/TUSEF mid-grant meeting in Bangkok, in November of last year, I participated in a discussion about mass media communications with a news anchor from True Visions Radio Thailand of the National Broadcasting Company of Thailand (NBT). “Mass media presentation has an off-track focus, rather a lack of focus and preparation” as stated by the news anchor. The man, who had worked for numerous media and journalism outlets in Bangkok, went through a run-down of the biased opinions, politically censored, and corporately corrupt characteristics of the major news sources in the city. I couldn’t believe what I was hearing, especially considering that the city of Bangkok is one of the largest hubs in Southeast Asia.

I finished grading the final exams of my students in Chiang Rai a few weeks ago, and have been traveling throughout southern Thailand and Malaysia since. Upon our return flight to Bangkok from Kuala Lumpur on February 24th, we took a shuttle bus to Khao San Road. We saw the thousands of red-shirted protesters marching the streets. As the bus dizzily weaved in and out of foot-traffic, we took pictures of the marchers as they smiled and waved. There was no fear, but rather smiles. There was not a feeling of tension in the air, but rather of fueled social activism.

Please look at the following illustration of that day published by the Los
Angeles Times (http://www.latimes.com/news/printedition/asection/la-fg-thailand-protest25-2009feb25-pg,0,6824945.photogallery). 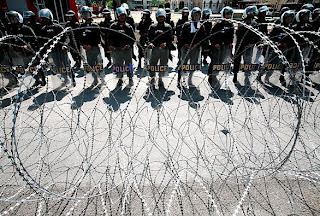 Then, take a look at the pictures I took with my own camera –granted I did not capture the entire day’s event, nor was I a reporter on the ground, but I still believe my depiction to be slightly more accurate. The L.A. Times took a fear approach, and I choose to take a human approach. I feel that similar “protests” in the United States would be seen as political activism and socially organized movements worth a more neutral depiction –in a foreign land, it is shown as aggressive protesting. In a quote from the same news anchor at True Visions, “If you don’t expose yourself to international contexts and cultures, it will eventually affect the way you tell the story.” 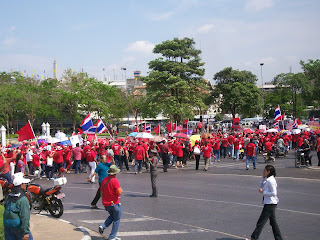 People not joining the movement appear to be just going about their day. 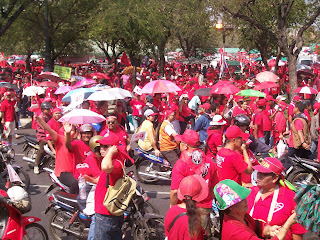 Notice the waving hands…they’re waving at us on the bus.

To be fair, here is an article posted by Reuters on News Daily that paints a better picture: http://www.newsdaily.com/stories/tre51o0m1-us-thailand-protest/.

Furthermore, what does this all mean? It means that as people, not as consumers, we owe it to ourselves and our planet to search out the most ethical and unbiased sources of news. They may not be perfect, but here are a few international sources that I recommend: