ORIENTATION
Orientation in Bangkok, provided by the Thailand-U.S. Educational Foundation (TUSEF), was exceptionally well-organized, beneficial, and a brilliant start to continually enriching experiences in Thailand. The orientation program offered to the ten ETA grantees, including myself, lasted five weeks. In addition, TUSEF provided us with ample accommodation and a more than generous settling-in stipend. Orientation was held at and in partnership with Chulalongkorn University’s College of Education. Personally, I feel honored to have been given the opportunity to study and learn at one of Bangkok’s most prestigious universities.
Our accommodation, Suskit Nives International House, was located a short walk away from the University. It was located on a small street (soi) and close to plenty of street (hawker) food. Indeed, the first vivid memories of my emersion into Thai culture are of sitting on the crowed street near the dormitory trying feebly to order dinner for myself and others. The language training we received during orientation was, without a doubt, invaluable. After 30 hours of Thai language training I was able to order food, give simple directions, talk about my background and family, and most importantly make good first impressions with Thai people by introducing myself and using basic conversational words. Thai people are easily impressed and incredibly encouraging toward foreigners who modestly attempt to speak their language –I have found that it is not only fun but rewarding to speak Thai with local people. By practicing Thai and often butchering the words (there are five tones for single-syllable vocabulary), I remind myself that learning a language is about one’s willingness to speak, one’s willingness to practice regardless of possible mistakes –this has helped me step into the shoes of the students who are learning my native language.
Orientation offered me an experienced-based approach to teacher training. Training sessions incorporated doing rather than simply listening to lectures; on a daily basis we were asked to practice implementing the teaching techniques being taught. The greatest practice during orientation was the opportunity we were given to teach at a local girl’s school in Bangkok for five days. At the end of the week, we smiled knowing that we would soon be teaching our own students in the provinces, and were incredibly grateful for the chance to have had real classroom experience and personal feedback during orientation.

We also had the opportunity to spend two days and one night at the home of a local Thai family connected with the Rotary Club of Bangkok. My home stay experience was exceptional to say the least, and I was pleased to have been welcomed so graciously into their home.

All things considered, I would be challenged to think of a more well-rounded orientation program. It was incredibly generous of the TUSEF staff to extend such huge amounts of time, support, and energy into our development as scholars new to Thailand.
MOVING TO CHIANG RAI

After five weeks of orientation, we said goodbye to our fellow Fulbrighters and headed to separate schools throughout the country. The transition from Bangkok to our schools in the provinces was well organized by TUSEF. They arranged for each of us to have a member of the TUSEF staff accompany us to make sure we were settled-in, to help us establish a bank account, and to ease the inevitable qualms of moving to a new place alone. Meeting the faculty at Princess Chulabhorn’s College Chiang Rai was great. I nervously tried to use the Thai I had learned over the past few weeks to explain a bit about myself and my background. I met the other two American teachers who had just arrived at the school the day before. And, I was introduced to the house on campus where I was to live. This house, once strange and barren to me, now feels like home –full of memories and homemade, desperately concocted decorations.
My first week at Chulabhorn’s College Chiang Rai (PCC) was distinctly worrisome to be perfectly honest. I was actually ill-prepared as far as my wardrobe was concerned. My dress pants which were suitable for meetings in Bangkok were unacceptable in a school full of skirts. I wanted so badly to make a great impression and I felt nervous that my clothing was potentially offensive. I felt nervous about many small things which I later realized was a waste of stress on my life. With the purchase of a few skirts and the establishment of a routine, things started falling into place and I became less nervous and more interested in getting to know the people around me.
Adjusting to a new environment is always potentially nerve-racking. For my life, I like to keep an optimistic attitude and an open-mind. When I moved to Chiang Rai I also had the advice of P’Tip (the director of TUSEF and personal mentor) in my thoughts. Her advice was this: “give yourself ENOUGH time to adjust.” Sounds like common sense huh? However, consider the emphasis on enough. Consider the possibility that giving yourself time is only sensible if you allow yourself enough time to adjust –however long enough time is for you personally.

Princess Chulabhorn’s College Chiang Rai is a co-ed boarding school with nearly 800 students enrolled in grades M1 to M6 (the U.S. system equivalent of 7th through 12th grade). Working with the students at PCC has been and continues to be incredibly rewarding. The students here are particularly bright and hardworking. Of course I have had my set of struggles thus far teaching English as a foreign language, but the caliber of the students at PCC has allowed me to be more creative in the classroom and with project assignments.
LIVING, LEARNING, AND TEACHING
The people, the food, the students, the faculty, the school, and the mountains brilliantly painted on the Chiang Rai horizon –I can’t help but to smile. I am truly happy to be living in this amazing country. My life in Thailand is easy-going and filled with people who are kind, unboundedly generous, and generally worry-free. I find it hard putting into words how much I appreciate the people around me, the people I have met along the way, and the people I am sure to meet in the coming days and weeks. 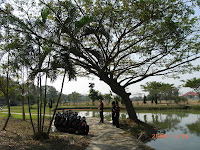 Teaching in this country has been challenging and rewarding all the same. I am consistently impressed by my students. Watching the ones that shy away from English begin to come out of their shell as they feel more comfortable speaking in my class gives me a great feeling. Having personal interactions with the ones who are most motivated and inspired by the English language is the message I crave confirming my role here as important and worthwhile.

I have met administrators from Israel, Korea, and Singapore who have worked on projects with the administration at PCC –some of the projects being student exchanges. And, how is it that these projects can exist among such different cultures? The answer: English. To say that the English language is becoming the most important language in the world is not to egotistically boast as a native speaker (I just happened to have grown up speaking this particular language). Rather, it is to be optimistic about a world so smart and so creative that the spread of English can be looked at as a way to create a universal language –to help the human race communicate more effectively. In my humble opinion, most problems of violence that plague this Earth are a result of poor communication. Why not progress toward the idea of creating a universal means of communication? 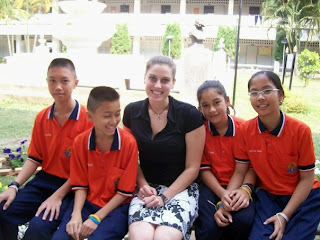 I am doing my best to help Thai students express themselves more clearly to people from other countries through the English language. I couldn’t tell you how effective I am as a teacher, but I can tell you that I certainly try. It is hard to distinctly measure my “progress,” but I have had my share of successes since beginning my grant here in Thailand.  Looking ahead, I will continue to work hard and encourage my students.
Outside of the classroom, I volunteer at New Zealand Educational Services (N.E.S.) language school, where I co-teach an English conversation class for a group of local nurses.  Also, I organize an English Game Club three nights a week for students at Princess Chulabhorn; it’s primarily my 7th grade students who attend, and we have great fun playing games such as Monopoly, Bingo, Sorry, Uno, and others.
SUGGESTIONS FOR FUTURE FULBRIGHTERS IN THAILAND
My suggestions are both specific and general by nature. The most important thing to remember is to always have optimism in your life. With optimism comes a more beautiful life. Jump into this experience and don’t hold back. Other suggestions, in no particular order, are perhaps best expressed through bullet points:
* Get to know the TUSEF board members. They are incredible people and provide a support network and makeshift family for you in Thailand.
* Give yourself ENOUGH time to adjust.
* Take advantage of every opportunity.
* Be humble and don’t ask for too much.
* Be happy to learn the Thai language.
* Be creative in the classroom. After all, we are speaking teachers, not grammar teachers. Try not to find yourself rigidly attached to the idea of what teaching ought to be. Allow yourself the freedom to create a more dynamic classroom.
* Organize an English Camp! Here’s how. LASTLY
I would like to express my appreciation for anyone who is living or working in a foreign country. As it seems, I am a cultural ambassador, a term I am still trying to specifically define. As much as it is my role to be a language teacher, I have also been offered this opportunity by U.S. and Thai governments cooperatively to be a cultural ambassador. My role here in Thailand should help create, maintain, and strengthen mutual understanding. 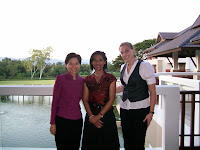 Perhaps mutual understanding among the people of this Earth is the most important thing we can do to promote a more peaceful world. My role as an cultural ambassador can be measured on a daily basis. It is through humility and listening that I live in harmony with ideas or cultural differences that could be “foreign” to me. I am putting forth my best effort to be an agent of positive change, to help others understand my cultural upbringing, and to show understanding for the upbringings of others.